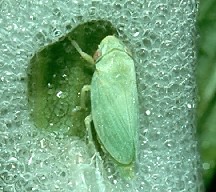 Photo by:
Dwight Kuhn/Bruce Coleman Inc.
Spittlebug, common name for members of a family of plant-feeding insects, the nymphs of which cover themselves with a protective frothy material that looks like human spittle. Spittlebugs, like their relatives the aphids and cicadas, suck plant juices with their needlelike mouthparts. Although the bugs' feeding can distort or stunt herbaceous plants, they are generally harmless. Nymphs and their spittle can be washed off of plants with a forceful stream of water. About 850 species of spittlebugs are known worldwide, and 23 species are distributed throughout North America. They can be found on a wide variety of plants.

Adult spittlebugs are inconspicuous, dull-colored, and about 6 mm (0.25 in) long. They readily jump or fly when disturbed. Females lay small eggs in rows, usually in hidden parts of the plant, such as the sheath between leaves and stems. Immature spittlebugs are readily recognized by the frothy white mass that surrounds them. The spittle is a mixture of watery waste; air, which is blown through abdominal openings to make bubbles; and a glandular secretion. The bugs secrete the frothy spittle to protect themselves from parasitic and predaceous insects. More than one nymph may be found in a single spittle mass. Spittlebugs have incomplete metamorphosis. Nymphs undergo about five molts and may be orange, yellow, or green. Most species have only one generation per year.

One common species, the meadow spittlebug, is found throughout the United States. It feeds primarily on herbaceous plants, but also occurs on conifers and young woody deciduous plants. Adults are robust and tan, black, or mottled brownish. Nymphs are yellow to green beneath their foaming mass of spittle. The western pine spittlebug is one of several species that are common on conifers and the plants that typically grow under them in the Western United States. Nymphs are dark greenish, brown, or black, sometimes with lighter spots or a pink abdomen. Adults are brownish orange to dark brown and may have an indistinct diagonal white line across the back.