Everything About Cochineal Insect 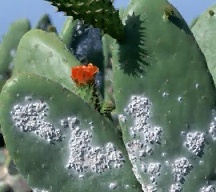 Photo by:
J. C. Carton/Bruce Coleman Inc.
Cochineal Insect, a scale insect traditionally used by Native Americans to make a crimson dye called cochineal. Spanish explorers in the 1550s brought cochineal from Mexico back to Europe. Cochineal became the most widely traded and, next to gold and silver, the most valuable product of the West Indies. Cochineal production was lucrative until the 20th century when synthetic dyes largely replaced cochineal. The cochineal scale that had commercial importance is native to South America. Several other scale insects in the same genus are native to desert areas of the southwestern United States. These scales also were once used to make dye, but to a much lesser extent than the South American cochineal insect.

The adult female cochineal insect is 2 to 5 mm (0.1 to 0.2 in) long with a distinctly segmented, purplish red or carmine-colored body. Cochineal insects feed on certain prickly pear cacti and are most obvious on the flat pads of the cactus in spring. They occur in colonies covered with a fluffy white wax that they secrete. The cochineal insect's bright reddish body is not visible unless the waxy secretions are scraped away and the scale's outer covering is punctured. Cochineal is produced from the dried, crushed bodies of cochineal scale insects. A carefully tended cactus yields about 20 pounds of scale each year.

The cochineal industry has an intriguing history. For over 200 years after the insect's discovery, Spain prohibited export of live cochineal insects and prevented foreigners from visiting production areas in the Americas. Many Europeans mistakenly thought the dye was produced from cactus fruit, and Spanish authorities encouraged such misconceptions in order to maintain their cochineal monopoly. The Dutch amateur scientist Antoni van Leeuwenhoek in 1704 used microscopic lenses to analyze dried cochineal. Leeuwenhoek determined that cochineal consisted entirely of female scale insects. Many people found this unbelievable. Wide acceptance that cochineal dye was produced from the cochineal insect did not occur until the late 1700s, when the insects were successfully introduced and established outside of the Americas.

Cochineal production peaked in the 1870s, when as much as 7 million pounds of dye were produced annually. The development of less expensive, synthetic aniline dyes virtually eliminated cochineal production as well as cultivation of prickly pear cacti for this purpose. A small cochineal industry still exists in the Canary Islands, Peru, and Mexico. Recent findings that some synthetic red dyes may induce cancer has renewed interest in cochineal production. Cochineal-based dye is again becoming popular as a coloring agent, especially in processed foods.