Everything About Scale Insects: Mealybugs, Cochineal Insects and others 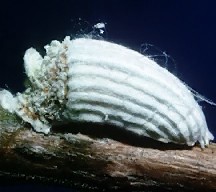 Photo by:
J.H. Robinson/Photo Researchers, Inc.
Scale Insect, common name for any of about 2000 insect species, found worldwide, that attach themselves in great numbers to plant and tree surfaces, creating a scalelike appearance. The adult females attach themselves by their mouthparts, especially to bark-covered stems, and secrete a waxy, powdery, or calcareous substance that camouflages them and seals them off from predators. Scale insects range from the size of a pinhead to more than 2.5 cm (more than 1 in). They are among the most destructive insects, especially injurious to fruit trees, the limbs of which they stunt or kill by draining the sap.

In their nymphal stage, both males and females live by sucking plant juices. Only the male undergoes complete metamorphosis; it loses its sucking and piercing mouthparts and develops antennae, legs, and a single pair of wings, becoming a nonfeeding, motile adult. The female undergoes degeneration; it retains its mouthparts but develops no wings or eyes and keeps only rudimentary antennae and legs, becoming a nearly immobile, shell-like organism with little resemblance to ordinary insects. The females, which often encrust tree stems in large numbers, lay huge quantities of eggs, which they protect under their waxy coverings.

Among the best-known American scale insects are the cottony-cushion, or fluted, scale, so called because of the grooved, fluffy, white eggs it lays, and the San Jose scale, so called because it was introduced into the United States at San Jose, California. The cottony-cushion scale was introduced from Australia in 1868 and caused great damage to California citrus groves until a ladybird beetle was introduced to hold it in check. The San Jose scale is a round insect that destroys apple, pear, and other fruit trees; it secretes a hard, gray coating that is extremely resistant to sprays. The scales most commonly encountered by the home gardener are the soft scales. The brown soft scale parasitizes many house, garden, and greenhouse plants; the hemispherical scale is a common greenhouse pest. Mealybugs often blanket the stems of garden plants in a manner similar to that of aphids and are characterized by their secretions of white, moldlike wax.

Before the production of synthetic resins and waxes, the secretion of one species of scale insect, lac, was gathered in East Asia as an important ingredient for shellacs, varnishes, polishes, sealing wax, and many other water-resistant and weather-resistant products. The bright red scale insect was once a principal source of dyestuff.

Scientific classification: Scale insects belong to the order Homoptera. The cottony-cushion, or fluted, scale is classified as Icerya purchasi, the San Jose scales as Quadraspidiotus perniciosus, the brown soft scale as Coccus hesperidium, the hemispherical scale as Saissetia coffeae, the lac as Laccifer lacca, and the red scale insect as Dactylopius coccus.