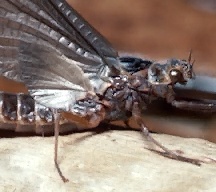 click to enlarge
Photo by:
David M. Dennis/Tom Stack & Associates
Mayfly, common name for delicate insects that often emerge in great numbers from lakes, streams, and rivers. The approximately 1500 species range in length from 1 to 3 cm (0.4 to 1.2 in) and have two or three long tail filaments; transparent, upright forewings; short antennae; and bulging, light-sensitive eyes. Both adults and larvae are important food of trout; because of this, artificial lures have been patterned after mayflies for more than 400 years.

Mayflies usually spend one to three years as underwater nymphs, breathing by means of gills and feeding on microscopic plant life. After 10 to 20 molts they emerge from their nymphal skins on the water surface and fly to nearby plants, where they go through a last molt, shedding their downy, waterproof skins. (Mayflies are the only insects to molt in a winged stage.) Now fully adult, they cannot feed, but instead they form male and female swarms that mate over water. After mating, the males die; the females live a few more hours, depositing the eggs in water and thus starting the next generation of nymphs.

Mayflies are among the oldest insect groups and have been found as fossils dating from about 300 million years ago. At lake and river resorts, expiring mayflies often accumulate in "snowfalls" under outdoor lighting.