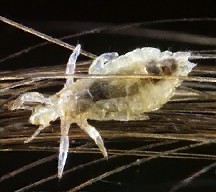 Photo by:
J.A.L. Cooke/Oxford Scientific Films
Louse, common name for several species of small, wingless insects. Three types of true, or sucking, lice infest humans: the crab louse, a broad, grayish-white insect, about 0.3 cm (about 0.13 in) long, usually found in the hairs of the pubic region; and two slender, gray lice, also about 0.3 cm long: the body louse, usually found in clothing, and the head louse, found in the hairs of the head. The eggs, or nits, are attached to the hair or deposited in the seams of clothing. These species subsist on the blood of humans; the body louse is a vector in the transmission of several diseases. True lice infecting domestic animals include the hog louse, the horse louse, two species of cattle lice, and the dog louse.

The biting lice, or bird lice, are insects differing from the true lice in that they possess biting (rather than sucking) mouthparts. They feed on the feathers and skin of birds and occasionally on the skin of other animals. The chicken louse is a species about 0.3 cm (about 0.13 in) long, common on domestic fowl. There are also several species that are parasitic on turkeys and pigeons.

The name louse is also applied to several other small insects, such as the plant lice, bark lice, and book lice. The wood louse (also known as sowbug), a crustacean, is so called because of its superficial resemblance to lice.