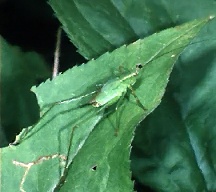 Photo by:
John Dudak/Phototake NYC
Katydid, any of several species of long-horned grasshoppers that are found in the western hemisphere. The name katydid is meant to represent the characteristic sound made by the male when it rubs its wings together to attract females. Katydids are tree-living insects that are most commonly heard at night during summer and early fall. They are generally about 6.5 cm (about 2.2 in) long and green in color, with long antennae (the "horns"). Their broad wings mimic leaves in appearance and serve as camouflage. The best-known species is found throughout the United States east of the Rocky Mountains. Other species, found in the eastern United States, have long, narrow wings and more slender bodies. Southern and western katydids resemble these species.

Scientific classification: Katydids belong to the family Tettigoniidae, in the order Orthoptera. The best-known species is classified as Pterophylla camellifolia.