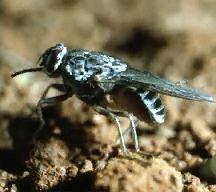 Photo by:
David Shale/Oxford Scientific Films
Tsetse, also tsetse fly, common name for any of several African bloodsucking insects. Tsetses are found abundantly in forests and along the edges of lakes and rivers in central Africa. The adult flies, which are about 2.5 cm (about 1 in) long, are brown above and brown with yellow stripes or spots below. They have biting mouthparts, and a large proboscis extends horizontally from the tip of the head. The heavily veined wings, in contrast to those of other bloodsucking flies, are held crossed over the abdomen when not in use. The female periodically produces one full-size larva and buries it in the ground or among decayed leaves; there it undergoes complete metamorphosis and develops into the adult.

The common South African tsetse fly transmits the parasitic protozoan known to produce the often fatal disease called sleeping sickness. The parasites are drawn into the body of the fly with the blood sucked from an infected person and, after a period of development, can be conveyed to the bloodstream of healthy victims. Rhodesian sleeping sickness, restricted to parts of Zimbabwe and Tanzania, is also transmitted by a species of tsetse fly, as is tsetse fly disease, or nagana, which affects many cattle, horses, and goats in southern and central Africa. Animals perennially subjected to the disease may become immune.

Scientific classification: Tsetse flies make up the family Muscidae in the order Diptera. The South African tsetse fly is classified as Glossina palpalis, and the tsetse fly that transmits Rhodesian sleeping sickness and nagana as Glossina morsitans.