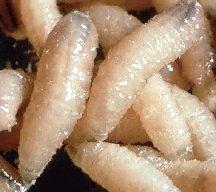 Photo by:
USDA/
Science Source/Photo Researchers, Inc.
Screwworm (fly), a parasitic fly known for its screw-shaped larvae, which infest open wounds. The screwworm is a serious pest of livestock and certain domestic and wild animals. It is found in subtropical and tropical climates from the extreme southern United States to Argentina. During summer it may occur as far north as southern Canada, probably due to the transport of infested animals. Screwworms are killed by freezing weather and are not a threat in the United States, except in southern Texas.

The adult screwworm is a dark, shiny, bluish-green fly about 10 mm (0.4 in) long. It has a reddish-yellow face and three black stripes on its upper thorax between the wings. The fly lays eggs on the skin of the animal host near open wounds such as barbed-wire cuts, scratches from thorns or from fighting, sore eyes, or injuries from brand marks, dehorning, or castration. The egg masses look like fish scales. The larvae, called maggots, hatch within a day and use their hooklike mouthparts to tear into the flesh. The maggots initially feed in the wounds but then invade healthy tissue. Screwworm maggots have toxic saliva, which promotes infection of wounds and production of foul-smelling pus. This attracts other species of flies that normally feed only on dead animals. The host animal becomes sick, stops eating, and dies unless treated.

Mature screwworm larvae are tapered and about 17 mm (0.67 in) long. Swollen ridges encircle each segment of the body, so the larvae look somewhat like screws. Flies undergo a process of development called complete metamorphosis. The screwworm larvae mature about 4 to 10 days after hatching, then drop from the host's wounds to the soil. The larvae pupate in soil for about 3 to 14 days before emerging as adults. Development from egg to adult takes about three weeks during summer. This pest has about 8 to 10 generations a year, so the presence of even a few flies in spring can lead to severe infestations by fall.

The screwworm was only a minor pest through colonial times. As farms and ranches grew in the warmer parts of the western United States and Mexico, the fly increasingly infested cows. The modern cattle industry provided many thousands of cows as potential hosts for the fly and transported cattle hundreds of miles as part of commerce. In addition, the screwworm fly can travel on its own up to 290 km (180 mi) in several days and can complete a life cycle in as little time as three weeks. These factors helped the fly population increase and its range spread to become a major pest of cattle. Problems with screwworm in cattle were reported as early as 1825 in the United States. The problem culminated in a serious outbreak in the southern United States beginning in 1932. By 1934, this outbreak had resulted in over 1.3 million cases of infestation and the death of over 200,000 animals.

Screwworms are no longer a serious threat and have been largely eradicated from North and Central America due to the success of an ingenious pest control program. The program utilizes a technique called sterile male release. Sterile male screwworms are released into the wild in numbers so great that fertile males rarely get a chance to mate with females. As a result, the female flies lay only infertile eggs that do not survive. During 1959, about two billion male screwworm flies sterilized by gamma-irradiation were released during an 18-month period in an area of about 181,000 sq km (69,900 sq mi) in Florida. The screwworm was quickly eradicated from that state. A similar program was initiated in the southwestern states in 1962 and later along the Texas-Mexico border. These efforts involved the release of as many as one billion sterile male flies every year. The screwworm was declared eradicated in the United States by 1966; it is estimated that the program has saved the United States economy up to $400 million annually.

In 1972 a screwworm eradication program was initiated in Mexico. Producing and releasing up to 500 million sterile male flies weekly, the program was declared a success in 1991. Similar efforts in Central American countries have continued to push the eradication line southward. Currently, only Nicaragua, Costa Rica, and Panama have viable wild screwworm populations; eradication programs have been established to eliminate screwworms north of Colombia and to maintain a sterile fly barrier in eastern Panama to prevent reinfestation.

Scientific classification: The screwworm belongs to the blow fly family, Calliphoridae. It is classified as Cochliomyia hominivorax.