Everything About Robber Fly 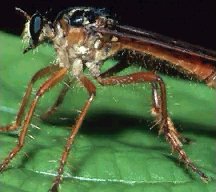 click to enlarge
Photo by:
Phil Devries/
Oxford Scientific Films Ltd.
Robber Fly, any of a family of medium to large predatory flies known for their fast flight, excellent vision, and their habit of catching large prey while in flight. Also called assassin flies, they are widely distributed. There are about 5000 species worldwide and about 900 species in North America.

Robber flies are highly variable in size and body shape, ranging from 0.5 to 5.0 cm (0.2 to 2.0 in) in length. Most species are slender-bodied, with hunched backs and tapering abdomens; but some are stout-bodied and hairy, with rounded abdomens, resembling bees. They have large eyes that face toward the sides, and the top of the head is typically concave between the eyes.

Robber flies are impressive predators that typically specialize in flying insects, including wasps, bees, and dragonflies; the prey may be larger than the robber fly itself. Most robber flies frequent sunny, open areas and are active during the warmest parts of the day and year. They perch on branches, logs, stones, or the ground, and rush out to attack when suitable prey flies by. The robber fly uses its bristly legs to intercept the prey by grasping it around the head or back. Then, employing its needlelike mouthparts, the robber fly stabs the prey and injects a saliva that contains nerve toxins and digestive enzymes. This quickly paralyzes the prey and liquefies its tissues; the robber fly then sucks out the prey's insides, much as spiders do. Some robber flies closely resemble certain species of bumblebees. This may provide the flies with protection against potential predators, and it may enable the robber flies to more easily approach and attack the bees themselves.

The larvae, or immature stages, of robber flies are wormlike predators. They live in soil, rotting stumps and logs, and similar moist organic material. Larval robber flies live solitarily and in secluded places, so their ecology and habits are less well known than are those of the adults. The larvae feed primarily on the eggs and larvae of other insects, including beetles, grasshoppers, and flies.

Scientific classification: Robber flies make up the family Asilidae in the insect order Diptera, the true flies. They are in the suborder Brachycera, along with the bee flies and horse flies, among others. Most North American bumble bee-mimicking robber flies are in the genera Laphria and Mallophora.