Everything About House Fly 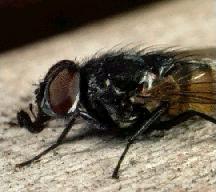 click to enlarge
Photo by:
Richard Packwood/Oxford Scientific Films
House Fly, common name for the most familiar species of nonbiting muscoid fly, found in the vicinity of human habitations throughout the world. It is often a carrier of such diseases as typhoid fever, cholera, dysentery, trachoma, and anthrax. The adult fly transmits disease by contaminating food with disease organisms it has picked up on its hairy legs or has ingested and then regurgitated. The taste-sensitive cells of the common house fly are located on its feet as well as on its mouthparts. The female lays an average of 150 white eggs in a mass about 1 mm (about 0.04 in) long. The eggs are laid in horse manure or other decaying substances. The female lives about two and one-half months and lays between 600 and 1000 eggs during its lifetime. The eggs hatch in about 12 hours into white, legless larvae called maggots, which grow to 12.5 mm (0.5 in) in length. The maggot pupates in five to six days. The new adult emerges in another four to five days if the weather is warm or in a month or later if weather conditions are unfavorable. On the average, 12 generations of house flies are produced in one year.