Everything About Fruit Fly 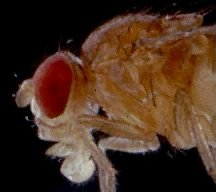 click to enlarge
Photo by:
J.A.L. Cooke/Oxford Scientific Films
Fruit Fly, common name for two families of true (two-winged) flies, the larvae of which feed on fresh or decaying vegetable matter. True fruit flies, such as the house fly-sized apple maggot, have intricate, often colorful wing patterns by which females recognize males of their species. They are sometimes called peacock flies because of the way they wave and display their wings in courtship. The term fruit fly is also applied to the much smaller vinegar flies.

Among the true fruit flies, adults of the apple maggot are found in orchards throughout the summer months. The female punctures the apple skins with its sharp ovipositor and lays one or more eggs in each apple. The maggots bore through the pulp and grow to about 6 mm (about 0.25 in) in length. After the apple has fallen, the larvae burrow about 3 cm (about 1 in) underground, where they spend the winter and spring as pupae. The cherry maggots, the currant fruit fly, the melon fly, and the olive fruit fly have similar life cycles. The Mediterranean fruit fly spoils fruits grown in Mediterranean climates. Brought under control in Florida in 1930, it reappeared in other countries in 1956, causing worldwide quarantines on imported fruit; it recurred in California in the 1980s.

Vinegar flies, the study of which has provided much of the current information on heredity, proliferate on yeast produced from rotting fruit and similar fermenting substances. The most important vinegar fly is the red-eyed pomace fly. It has exceptionally large chromosomes in the salivary gland and can produce a large new generation in only two weeks, making it an ideal subject for genetic experiments.