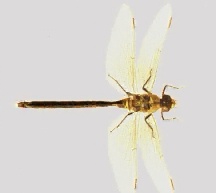 Photo by:
Dorling Kindersley
Dragonfly, common name for any member of an order of predaceous aquatic insects characterized by an elongate body, agile flight, and two roughly equal pairs of membranous wings. The order is divided into two suborders, the dragonflies, which hold their wings spread when resting, and the damselflies, which hold their wings together above the body when resting. In both groups, the wings are unable to disengage and fold down as in most other insects. About 5900 species are known; members are found in all temperate and tropical regions of the world. Popular names for adults of both dragonflies and damselflies are darning needle, snake feeder, snake doctor, and mosquito hawk.

Characteristics
The adult head consists largely of the compound eyes; the antennae are short and hairlike. Mouthparts are adapted for biting and for scooping prey from the air. The legs are located far forward on the body and are used mainly to grasp a resting spot such as a twig. Most temperate-zone species of dragonflies have wingspreads of 5 to 8 cm (2.0 to 3.1 in), but wingspreads of tropical species may reach 20 cm (7.9 in). The largest known dragonfly lived over 270 million years ago in the Carboniferous period and had a wingspread of 74 cm (29 in).

Development
Most dragonflies simply drop their eggs into the water or attach them to the stems of aquatic plants. Damselflies and a few dragonflies deposit elongated eggs in slits that they make in the stems of plants at or below the waterline. The eggs develop into nymphs that spend their life entirely submerged, feeding on other aquatic animals. Dragonflies and damselflies undergo incomplete metamorphosis during their development. Damselfly nymphs are generally more slender than dragonfly nymphs and are further distinguished by three bannerlike gills at the end of the abdomen. A special extensible hinged mask can reach forward to grasp a victim. Dragonflies may remain in nymphal form from one to three or more years; during this period, the nymph molts ten or more times. Nymphs crawl out of the water just before their final molt and become winged adults.

Behavior and Importance
Male dragonflies are known for their territorial behavior. An individual will stake out an area that he continuously patrols as he awaits a passing female, moving from one resting point to another and finally returning to the first point. He will chase other males from the area. The male transfers sperm from his genitalia, on the end of the abdomen, to a special receptacle on his second abdominal segment, near the thorax. When a female enters his territory he pursues her and grasps her behind the neck with special clasping organs on the end of his tail. The female then contacts the male's receptacle with the end of her abdomen to receive the sperm. The pair may remain in this looped position for some time and can even fly when hooked together in this way.

Dragonflies and damselflies are important in the food webs of freshwater streams and lakes. The immature forms live in freshwater as predators. They normally feed on other invertebrates, but some large species may occasionally eat fish or tadpoles. Adults consume large quantities of mosquitoes and other small flying insects.

One of the most common dragonflies in the United States is the green darner, with a brilliant green head and thorax. This dragonfly also is found in Asia, the Pacific islands, and the western hemisphere-from Alaska to Costa Rica. A common North American damselfly is the American ruby-spot, whose wings are white with a red spot near the base. Another striking species is the black-winged damselfly of the eastern United States. The male has black wings and the female dark gray and white wings. In both sexes, the body is metallic green.