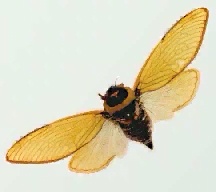 Photo by:
Dorling Kindersley
Cicada, insect widespread in tropical to temperate regions; in the United States cicadas are most abundant in the East and Midwest. Various cicada species are also known as locusts or harvest flies, but they are neither true locusts nor flies.

Cicadas are medium-sized to large insects, some species reaching a length of 3.8 cm (1.5 in). The body is stout and the head short, with bristlelike antennae, large eyes, and sucking mouthparts. The two pairs of large wings are transparent, with branching veins. Drumlike membranes on the sides of the abdomen are used to make loud buzzing or shrilling sounds, as a sexual attractant.

The life cycle is unusual among insects for the lengthy development period of some species. Best known in the United States are the 13-year and 17-year "locusts." After mating, the female uses the ovipositor at the end of the abdomen to cut slits in tree twigs and insert eggs, laying as many as 600 eggs in all. The wingless young, called nymphs, hatch in about six weeks and drop to the ground, where they work their way a few centimeters into the soil. Feeding on the sap of tree roots, they slowly mature, the number of years depending on the species. When they emerge at last they climb up the tree trunk-sometimes tens of thousands on a single tree-and fasten themselves securely to molt. The adults emerge from the nymphal cases, dry in a few hours, mate, and feed on plants until they die in about one month. The stridulation of countless cicadas in a forest after a mass emergence creates an unforgettable sound that seems to travel in waves across many kilometers. The cicadas that appear in such mass emergences can sometimes damage orchards.