Everything About Underwing Moth 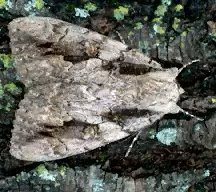 Photo by:
Gary Meszaros/Bruce Coleman Inc.
Underwing Moth, common name for a diverse group of large moths with distinctive wing patterns. There are more than 200 species of underwings, the majority occurring in eastern North America.

The forewings (wings nearest the head) of underwing moths appear in various shades of gray and brown, but the hindwings are boldly patterned in orange, yellow, red, or white. Underwing moths are named for the colorful patterns on their hindwings, which are covered by the forewings when the moth is at rest. As a result, the underwing moth's distinctive colors are only displayed during flight.

Before an underwing becomes an adult and develops wings, it spends part of its life cycle as a hairy, worm-like larva called a caterpillar. The caterpillar feeds at night, rests during the day, and is typically well camouflaged against the twigs or bark on which it rests. When its growth is complete, the caterpillar hides in tree bark crevices or in leaf litter at the base of the tree and begins its transformation. After about one month, it emerges as an adult moth.

Most underwing moths are active at night, and spend the day resting upside down with their wings open against the bark of trees or stumps. The exposed forewings of underwings provide marvelous camouflage, blending into the background on which the moth rests. Experiments have shown that underwings will select tree barks that increase their degree of camouflage. For example, the white underwing often rests on the bark of white birch trees while the blackish wayward nymph typically rests on dark tree trunks or blackened stumps.

When a bird or other potential predator disturbs a camouflaged underwing moth, the sudden, brilliant flash of color when the moth takes off may momentarily startle or confuse the predator, allowing the moth an extra moment to escape. The bright hindwing colors may also deflect an attack away from the moth's body, resulting in wing damage but not death.

During the summer, the female underwing deposits her eggs one at a time, or in small clusters, into tree bark crevices. Underwings commonly deposit their eggs on willows, poplars, walnuts, hickories, apple, and cherry trees. The hardy eggs are able to withstand extremely cold and dry weather and do not hatch until the following spring. As the leaf buds of the underwing's host plants start to open, the eggs hatch into caterpillars, which then feed on the growing leaves.

Scientific classification: Underwing moths are members of the moth family, Noctuidae, in the order Lepidoptera. The white underwing is classified as Catocala relicta, and the wayward nymph as Catocala antinympha.