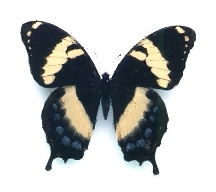 Photo by:
Dorling Kindersley
Swallowtail, common name for any of a family of large, brightly colored butterflies, many species of which have a tail-like projection on each hind wing. True swallowtails, which include more than 500 species, are common worldwide except in the Arctic. One of the largest butterflies in the United States is the dark-brown and yellow giant swallowtail. An adult female swallowtail generally lays individual eggs on one particular species of food plant. The larvae that hatch are characterized by a Y-shaped gland, the osmeterium, behind the head; it gives off a strong odor when the larva is disturbed. The larvae of the swallowtail pupate without a cocoon after fastening themselves to an object that will hold them upright. In hot climates the pupal stage lasts through a dry season.

Scientific classification: Swallowtails belong to the family Papilionidae of the order Lepidoptera. The giant swallowtail is classified as Papilio cresphontes.