Everything About Gypsy Moth 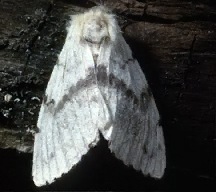 Photo by:
Harry Fox/Oxford Scientific Films
Gypsy Moth, large European moth accidentally introduced about 1868 into New England, where the larvae became a serious economic menace by destroying fruit orchards. The gypsy moth has invaded other northeastern states and in the early 1980s had been found in states as distant as Oregon and Arkansas. Spread of the insect was originally attributed in part to hurricanes that struck the Atlantic seaboard in the 1950s, carrying debris laden with gypsy-moth eggs southward and westward of their original range. Vehicles and transported goods to which eggs are attached, however, may be an equally likely cause of their spreading.

The gypsy moth is related to the browntail and the tussock moths, both similarly destructive. The adult female gypsy moth is white with dark wing markings. The wingspan is about 6.3 cm (about 2.5 in). The female has a heavy body and rarely flies, despite well-developed wings. Throughout her adult life span, the female gypsy moth remains near the pupal shell from which she emerged. The adult male is olive-brown with dark wing markings and, although a powerful flier, has much smaller wings than the female.

Eggs are deposited in masses numbering from less than 200 to more than 1000; they are yellow but are covered with buff-colored scales from the abdomen of the adult female. The larvae, or caterpillars, occasionally appear within a few weeks, but more often they hatch the following spring. The caterpillars are yellow with long hairs and have four longitudinal rows of colored tubercles. One tubercle from each row appears on each of the larval segments, those on the anterior segments being blue and those behind being red. The caterpillars devour the foliage of numerous trees, especially of oaks and birches.

Because repeated defoliation kills the trees, state authorities in infested areas have instituted intensive control measures. The Department of Agriculture directs its efforts toward preventing the spread of the gypsy moth into other areas.

Scientific classification: The gypsy moth belongs to the family Lymantriidae of the order Lepidoptera. It is classified as Lymantria dispar.