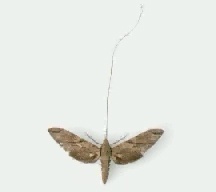 click to enlarge
Photo by:
Dorling Kindersley
Hornworm, any of a family of moth caterpillars named for a prominent horn on the end of their abdomen. When disturbed, the hornworm will rear up and wave its horn in a threatening display to deter predators. Hornworms are harmless to humans, although a few species can damage agricultural crops. Hornworms live throughout the world and are most diverse in tropical regions. There are about 1200 species worldwide, and 120 species in North America.

Hornworms are among the largest of all immature insects. Some grow to more than 10 cm (4 in) long and may weigh up to 10 gm (0.35 oz). Like many caterpillars, they are specialized herbivores that feed on leaves. Their digestive system often makes up more than half of the body, and some feed nearly continuously both day and night throughout their caterpillar lives, except when molting, or shedding their skin. Under ideal conditions, a hornworm caterpillar may grow to weigh 10,000 times its original weight in less than two weeks. It then buries itself in leaf litter or under stones, and begins to transform into a pupa within the protective case of its larval skin. After metamorphosis, the adult emerges as a moth. The pale green tobacco and tomato hornworms are pests of tobacco, tomato, and potato plants, as well as other plants in the nightshade family. Hornworms are one of the few pests that are not deterred by the noxious defensive chemicals in these plants. 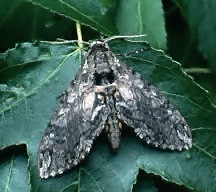 Photo by:
Matt Meadows/Peter Arnold, Inc.
Adult hornworms are generally known as hawk or sphinx moths, although the term hornworm also applies to them. They have stout, fuzzy bodies, long, feathery antennae, and long, relatively narrow wings. Most hornworm moths are striped or patterned in shades of gray and brown, but some are quite strikingly colored with black and red, green, or yellow. They feed on nectar through their long, hollow, tongue-like proboscises. Unlike butterflies, hornworms typically hover in the air while feeding at a flower, much as hummingbirds do, and for this reason are sometimes called hummingbird moths. The unrolled proboscis extends into a long drinking straw capable of reaching nectar in flowers with narrow, deep corollas. These features enable the moths to feed on hanging, tubular flowers that are inaccessible to butterflies and to most bees.

Moths of the hornworm family are powerful and fast fliers. Like many large insects, such as bumble bees, they maintain high body temperatures near 40° C (100° F) during flight. Under cold conditions, hornworm moths may shiver their flight muscles to generate heat before takeoff and flight. This behavior, known as thermoregulation, is unusual in insects.

Because of their large size, their importance as agricultural pests, and the ease with which they can be raised in the laboratory, hornworms have become important experimental animals for studying insect physiology. Scientists have learned how hormones control molting and metamorphosis in insects from studies with hornworms, and they have used hornworms to study how arthropod nervous systems develop.