Everything About Water Beetle 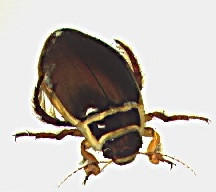 Photo by:
Dorling Kindersley
Water Beetle, common name for any of numerous aquatic beetles including the true, or diving, water beetles, the whirligig beetles, and the water scavenger beetles. There are approximately 2000 species of true water beetles native to land areas throughout the world. The hardened elytra, or wing covers, which are usually grooved in the female and smooth in the male, form a cavity above the body proper. The beetles rise periodically to the surface of the water to draw a fresh supply of air into the elytra cavity. Because of their rapacity, water beetles are also known as water tigers. The adults hibernate in the underwater soil during a large part of the year, but are usually active in spring, when they feed on insects.

Whirligig beetles are native to the temperate and tropical regions throughout the world, spending most of their life at the surface of the water. Their eyes are divided for vision in both water and air, and they can dive to considerable depths. Like the diving beetles, they are equipped with an air cavity under the wing covers. They hibernate during the cold months of the year, but emerge periodically for their characteristic whirling dances. The adults are lustrous black above and are yellow, black, or brown below. The body, like that of the diving beetles, is elliptical and convex.

Water scavenger beetles, with about 2000 species, are worldwide in distribution, but abundant in the warmer regions. Most species feed on vegetable matter, but some prey on small aquatic creatures. They are usually dark colored and shiny and elliptical in shape. Water scavenger beetles do not swim as rapidly as the diving or whirligig beetles; most species are aquatic or amphibian, but a few are terrestrial.