Everything About Stag Beetle 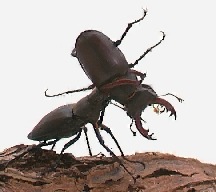 Photo by:
Dorling Kindersley
Stag Beetle, common name for beetles having long, antlerlike mandibles or jaws, used in combat. These mandibles are sometimes as long as the body of the insect, which in some tropical species is as much as 10 cm (4 in). The females have smaller jaws, which they use to dig holes in rotting wood for the deposit of eggs. Stag beetles are usually black, brown, bright red, green, or yellow in color, and despite their cumbersome jaws, they are able to fly. About 900 species are found throughout the world, 30 of them in North America. Stag beetles thrive especially in dank forests where many decaying logs are found. Among the better known forms in the United States are three species of giant stag beetles: the giant stag beetle, the reddish-brown stag beetle, and the black stag beetle. The giraffe stag beetle is found in India and Java.