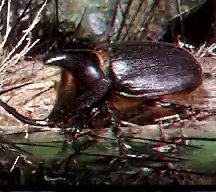 Photo by:
G.I. Bernard/Oxford Scientific Films
Scarab, common name for any of various large, bright-colored beetles of which about 30,000 are found worldwide. In addition to their brilliant coloring and bulky size, up to 15 cm (6 in) in length, scarabs are distinctive for diverse horns or protuberances growing on the head or thorax; those on the males of many species are used in combat. Scarabs are divided into two groups, the scavenging dung beetles, which feed on decaying plants, and the chafers, which feed on young plants. 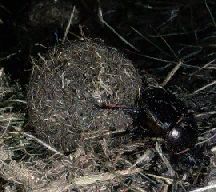 click to enlarge
Photo by:
Colin Milkins/Oxford Scientific Films
All species possess layered antennae as sense organs. The dung beetles lay their eggs in balls of dung, on which their young feed. Other species, such as the leaf-eating June beetles, also known as May beetles, deposit white eggs in the soil. Some 1300 species of scarabs are found in North America; one of the best known is the Japanese beetle. 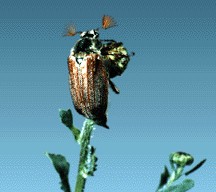 click to enlarge
Photo by:
Dorling Kindersley
In Egypt, an important species of scarab was held sacred by the ancient, sun-worshiping Egyptians, who regarded the beetle as a symbol of immortality. Amulets, seals, and rings in the shape of the beetle came to be known as scarabs.

Scientific classification: Scarabs make up the family Scarabaeidae, in the order Coleoptera. Most June beetles are classified in the genus Phyllophaga. The scarab sacred in ancient Egypt is classified as Scarabaeus sacer.