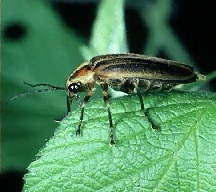 Photo by:
Gregory Scott/Photo Researchers, Inc.
Firefly, also lightning bug, common name for any of a large family of luminescent beetles. There are about 1100 species found throughout tropical and temperate regions. Adult fireflies are elongate, relatively soft-bodied beetles up to 2.5 cm (up to 1 in) long. The common North American species are about 1 cm (about 0.4 in) long. They are dark colored but may have yellow or orange markings. Luminescent glands are located on the undersides of the rear abdominal segments. Both sexes usually fly, and they emit intermittent light signals to attract mates or prey. They are often seen in meadows on late spring and summer nights. The larvae of fireflies are active, ground-dwelling predators. The larvae of some species are also luminescent and are called glowworms, a term also applied to phengodid beetles, a closely related family.

A firefly flashes when oxygen, breathed in through the abdominal tracheae, is allowed to combine with a substance called luciferin under the catalytic effect of the enzyme luciferase. This reaction produces a very efficient light, with almost no energy lost as heat. The timing of the firefly's flashes is controlled by the abundant nerves in the insect's light-making organ. The duration of the flashes depends on how long the luciferin takes to oxidize. In the pyralis, a common North American firefly, for example, the male flies around and flashes about every five seconds. The female stays on the ground and flashes in response about two seconds later, thus providing the crucial cue to their union.

The females of certain unusual insect-eating North American fireflies are known to mimic the flashes of other, nonpredatory females. When an unsuspecting male alights nearby, the predatory female reduces the intensity of her flashes to more closely resemble the weaker signals of the nonpredatory female until her prey is within reach. Most adult fireflies, however, eat only pollen and nectar or do not eat at all.

The members of one species of firefly in tropical Asia congregate in great numbers in trees and engage in synchronous flashing that begins with a single "pacemaker" insect. Waves of light travel up and down the tree or pass from tree to tree. Usually, only the males take part in this synchronous flashing.

Scientific classification: Fireflies make up the family Lampyridae, of the order Coleoptera. The pyralis is classified as Photinus pyralis. The insect-eating North American fireflies are classified in the genus Photuris. Phengodid glowworms belong to the family Phengodidae.