Everything About Bombardier Beetle 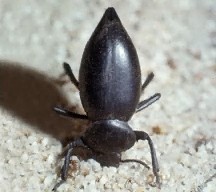 Photo by:
Richard Parker/Photo Researchers, Inc.
Bombardier Beetle, common name for any member of a closely related group of gregarious and predatory ground beetles that have the ability to eject from the anus a glandular fluid that vaporizes with a popping sound when it hits the air, blinding the victim and confusing it with the noise. The sprays, which are used in defense, can be as hot as boiling water. The beetles' bodies are flattened and oval. One common American species is 1.3 cm (0.5 in) long; some are larger. Bombardier beetles spend most of the year in aggregations under rocks, hunting at night for small insects and caterpillars. In the spring they disperse for mating and egg laying. The fertilized female inserts each egg into a ball of mud and attaches it to a twig or rock. In a few days a larva hatches that usually goes through three instars (molting stages) before pupation. The adult that emerges is attracted to a community of bombardier beetles by odors sensed through its antennae.

Scientific classification: Bombardier beetles belong to the family Carabidae in the order Coleoptera, class Insecta. The common American species that is 1.3 cm (0.5 in) long is Brachinus fumans.