Everything About Boll Weevil 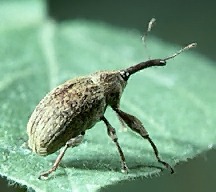 click to enlarge
Photo by:
Norm Thomas/Photo Researchers, Inc.
Boll Weevil, common name for a destructive beetle that infests cotton plants. The adult insect has a long snout, is grayish in color, and is usually less than 6 mm (less than 0.24 in) long. Feeding only on the cotton plant, it begins in early spring to puncture the buds and bolls and lay its eggs in them. The eggs hatch into larvae in three to five days. The life cycle of the boll weevil from egg to egg-laying adult is about three weeks. Four or five generations may breed in one season.

The larva, a fat, white maggot, does the most damage. It lives on the internal tissues of the buds and bolls. An infested bud usually drops, but most of the damaged bolls remain on the plant and become stunted or dwarfed. Adult weevils that emerge in the autumn hibernate in grass, old bolls, or other vegetation or in the seeds around the cotton gins. They reappear in spring.

The insect was first known in Central America, Mexico, and Cuba. In 1863 its ravages stopped the cultivation of cotton in Mexico. About 1892 it spread across the Räo Grande to Brownsville, Texas. From this focal point it moved outward at a rate of about 113 km (about 70 mi) a year, eventually infiltrating into every cotton-growing district in the United States east of the Rocky Mountains. The boll weevil has been the target of intensive pesticide spray programs. Today, however, it is increasingly treated using nonchemical means of pest control, including pheromone-baited traps and so-called clean culture, the careful removal of old cotton stalks to deprive the beetle of its overwintering refuge.

Scientific classification: The boll weevil belongs to the family Curculiondae, order Coleoptera. It is classified as Anthonomus grandis.