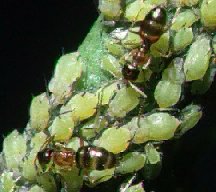 click to enlarge
Photo by:
Charles Kingery/Phototake NYC
Behavior
Ants are generally omnivorous; some species, however, eat only specialized foods. Most ants build a nest of some sort and store food there. A few species have developed highly specialized agricultural or pastoral habits. The red harvester ant of the central United States and Mexico frequents fields of grass, harvesting and storing the grass seeds. Leafcutting ants of the southeastern United States and tropical regions of Central and South America cultivate inside their nests a species of fungus that is used as food by the colony. Leafcutting ants are so named because the workers cut off pieces of leaves, which are carried back to the nest and used to fertilize the fungus gardens.

Many ants eat a sweet fluid, called honeydew, that is excreted by aphids. Some species actually keep and protect the aphids and care for their eggs. Honeypot ants of the southwestern United States store honeydew, using certain workers as living containers for the fluid. These workers are fed enormous quantities of honeydew; their bodies become so greatly distended that they are unable to crawl about. They remain motionless in the nest, disgorging droplets of food as required to feed other members of the colony.

Like social insects in general, ants may be termed industrious, although colony activity varies from a high degree of intensity at certain times of the day (usually early morning and late afternoon, or early evening in nocturnal ants) to lethargy at other times (usually through midday or in the early hours before dawn). Activity in Temperate Zone ants also varies seasonally, from a high level in midsummer to dormancy in winter. Lasting individual differences are present within the worker population of certain species; some are characteristically energetic while others are sluggish.

Some ants are capable of learning to find their way through fairly complex mazes, and they use this ability to establish individual foraging routes from the nest. The learning capacity of ants is rigidly limited, however. The complexities of ant organization that seem so remarkable to humans are actually a series of simple cues and responses.

In foraging from the nest, some ants, including the army and driver ants, operate in definite columns following chemical trails; others vary in the individual use of cues-for example, the direction and plane of polarization of light. Many ants function only through subterranean galleries and many are strictly arboreal, but more commonly the species range both above and below the surface of the earth. Communication among ants is highly efficient and is conducted mainly through tactual and chemical means, although some species exhibit vibratory and even auditory processes. Typically a "finder" ant arouses the colony, and excited nestmates may be influenced in the direction they move from the nest by various means, according to species. For example, the tiny Pharaoh ant uses chemical messages to alert and direct the colony. As a finder returns to the nest, it releases a track of chemical secretion that guides others directly to the food. Usually the excitement of the finder is greater when larger concentrations of food are discovered, and thus correspondingly greater numbers of nestmates are stimulated to forage.

The nests of many ants are inhabited by various beetles and other insects called myrmecophiles, or ant lovers. They may live in the colony as parasites, or they may benefit the ants in some way or have no effect at all. Many ants live as temporary or permanent social parasites in the colonies of other ant species. The Amazon ant carries out forays against other ants and brings back to the home nest some of the unconsumed brood to serve as slaves when mature. These slave ants perform the work of the Amazon colony, including excavation and brood-tending.

Ant Pests
In the United States, one of the most harmful pests among the ants is the red imported fire ant, a small stinging species that was introduced accidentally from South America. The large mound communities of this pest disrupt mechanized farming, and damage crops, and raiding workers injure or kill livestock and wildlife. The little black ant and its close relative, the Pharaoh ant, infest households in the United States. In the northern states, the carpenter ant is another common intruder in and around dwellings. Colonies of this structural pest usually gnaw out the galleries and chambers of their nests in wood initially infested by beetles. Also common in the north is the pavement ant, native to some Middle East countries but now found worldwide. Ants can be a nuisance simply because of their stings and bites and sometimes pugnacious behavior. Some species sting and bite simultaneously, rubbing caustic formic acid into the painful wounds they inflict. Wearing proper clothing can help to avoid ant bites and stings. Ants may pose a health threat to individuals that are allergic to insect stings. The red imported fire ant is the most notorious North American species in this regard. Harvester ants are responsible for many ant attacks. In Australia, bulldog ant workers can be up to 2.5 cm (1 in) in length, and they have a formidable sting. Similarly impressive in size is the bullet ant of tropical South and Central America, which reaches 2.2 cm (0.87 in) in length.

Burchell's army ant is a widely known tropical species. Army ants inhabit tropical areas. The workers include the major, or soldier, type, which has huge hook-shaped mandibles and a potent sting. Each day, colonies of this species organize a swarm raid that may have a front almost 14 m (more than 45 ft) wide and that advances at a rate of about 30 cm (about 12 in) a minute, although individual ants move much faster. These ants capture, tear, and carry back to their temporary nest any prey that cannot escape them. Their victims are usually other insects or spiders but at times, nestling birds, cornered snakes, or other small vertebrates are killed by stinging. Driver ants in one African genus carry out comparable swarm raids, which usually begin in the early evening. Small forest mammals or domestic stock cornered in pens and unable to escape the ants are sometimes included in the kill.

The economic significance of ants as pests is difficult to judge. Carpenter ants, which are considered destructive to wood, actually may contribute to forest economy by hastening the breakdown and recycling of timber previously infested by other insects. Also, seed-gathering ants may be destructive to agriculture when they become excessively numerous around grain fields or storage centers, but they also may suppress beetles and other grain pests. Ants such as aphid-tending species are frequent pests around lawns and gardens; however, the great benefit of these and other ants in aerating and mixing the soil also must be considered. Driver and army ants are efficient exterminators of other, more damaging insects and in some regions are temporarily allowed to enter human dwellings to clean up such pests. Most of the worst pest ants are ecologically displaced species that thrive in disturbed or artificial habitats created by humans.

Scientific classification: Ants make up the family Formicidae of the order Hymenoptera. The red harvester ant is classified as Pogonomyrmex barbatus. The ants of the southeastern United States and tropical America that cultivate a fungus in their nests belong to the genus Atta. Honeypot ants are classified in the genus Myrmecocystus. The Pharaoh ant is classified as Monomorium pharaonis, the Amazon ant as Polyergus breviceps, the red imported fire ant as Solenopsis invicta, and the little black ant as Monomorium minimum. The carpenter ant of the northern United States is Campanotus pennsylvannicus, the pavement ant is Tetramorium caespitum, and the most widely known of the American army ants is Eciton burchelli. The African driver ants that carry out swarm raids are classified in the genus Dorylus. Bulldog ants are in the genus Myrmecia, and the bullet ant is Paraponera clavata.