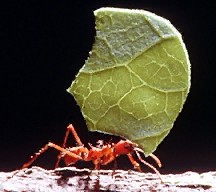 click to enlarge
Photo by:
Paul McCormick/Image Bank
Ant, common name for members of a family of hymenopteran insects known for highly organized social life and a wingless worker caste. At least 8800 known species exist, with most found in the tropics. Ants are found throughout the world except in the polar regions and at the very highest altitudes. True ants are entirely different from the so-called white ants or termites, which constitute a separate order.

Ants are of great importance in the environment. In the Amazon forest, the estimated biomass (amount of living matter) of all ants is four times the biomass of all the vertebrate animals combined. Ants contribute immensely to population control of their prey, recycling of plant material, seed dispersal, turning of the soil, and other major ecological processes. The tremendous success of ants is attributable in part to their collective mastery of social organization, which allows flexibility in approaches to survival.

Characteristics
Ants are closely related to wasps, as can be seen in their similar body structures-the abdomen is joined to the thorax by a slender stalk, or pedicel. The pedicel may be enlarged into one or two knobs. The antennae are typically elbowed or jointed in the middle. Some species of ants possess a functional sting that the workers use to defend the colony or themselves. Many species secrete formic acid, a potent repellent. The jaws of worker ants are used for many tasks, including defense, nest building, and larval care. The form of the jaws is often very specific to the type of work done by the particular worker. 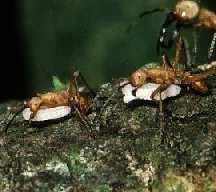 click to enlarge
Photo by:
G. G. Dimijian/Photo Researchers, Inc.
Development
The four life stages of an ant are egg, larva, pupa, and adult. The minute white or yellowish eggs laid by the queen hatch in two to six weeks and develop into white larvae, or grubs. After feeding a few weeks to several months, larvae become pupae, commonly but incorrectly called ant eggs. In some species the pupae are naked; in others, they are covered with cocoons spun from a substance that they secrete at the end of the larval stage. Queens and workers of some species are known to live longer than 15 years. Most ants are much shorter lived, living for only a few months.

Social Biology
All ants are social, living together in extended families of a few individuals in primitive species to half a million or more in the army ants. Ant colonies are characterized by two classes of individuals, reproductive and nonreproductive. The queen and the male ants are reproductive. They have wings and can fly, although males die shortly after mating and queens lose their wings when they begin their own colonies. As in other hymenopterans, males arise from unfertilized eggs. Fertilized eggs develop into females, most of which are workers; in many species, workers are wingless and do not reproduce. Workers gather food, care for the young, and defend the colony. Division of labor may occur among workers, based on physical and behavioral differences. This is called polymorphism. In polymorphic species, the largest workers are usually soldiers; they may be equipped with oversized, muscular heads and swordlike jaws. Medium-sized workers are foragers, and the smallest workers are nurse ants that tend the young. In some species, certain workers are extremely specialized. For example, in some harvester ants, soldier ants do virtually nothing but crack open seeds for other ants to eat. Such specialized behavior is usually flexible, however; any ant can perform any activity to a certain degree.

Many ants practice trophalaxis, which involves reciprocal feeding between individuals and the exchange of chemicals that trigger certain behavior. For example, larval ants secrete a substance that is highly attractive to nurse ants-this is thought to stimulate brood care and may be an important basis for colony unity. Other chemical signals, including pheromones, are very important in the sociobiology of ants.

The nests of many species of ants commonly consist of chambers and galleries excavated under stones, logs, or underground; some species construct their nests in mounds of earth and vegetable matter or in decayed trees or hollow twigs or thorns. The nests of army and driver ants consist of an open mass formed by the clustered bodies of millions of workers hanging from the underside of a raised log or other surface and enclosing the queen and the brood.